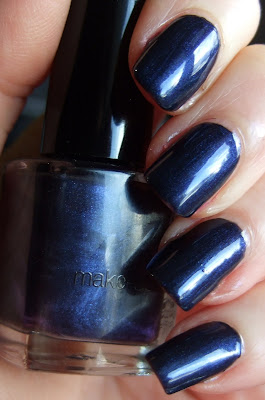 Midnight is a blackened navy with a silvery blue shimmer

makeup is the cosmetics brand created for Tesco (a UK supermarket) by Barbara Daly, one of the first  professional British makeup artists to be well known.  Barbara Daly was certainly the first makeup artist I knew by name back in the late 70's.  Yes I'm as old as that sounds!

This one is a mini-ish bottle, at 7ml it's quite generous for a mini!

Formula was good, it's nicely opaque and I didn't have any trouble with the small brush.

Swatch shown is 2 coats, no top coat.  Apologies for the line on my ring finger, I have a silk patch holding a break together and it wasn't very well buffed or covered in this shot

Overall a nice polish, good colour although nothing unique. I do have a fair few navy shimmers but they call to me, like a siren!

I'm sure most of you have heard of and seen Max Factor's Max Effect Fantasy Fire 45 by now.  It's a newly released potential dupe to the elusive, HTF, Clarins 230 aka Unicorn Pee.

I have to say straight up that I don't have Clarins 230.  I've toyed with those ebay auctions but always managed to talk myself down from paying £50+ for a single polish.  So this won't be a comparison post, I'm just gonna bombard you with pics of Fantasy Fire because whether it's a dupe or not (and it's certainly similar) it's still totally gorgeous.

I picked up Fantasy Fire in in a tiny branch of Boots a couple of days ago.  There were several new colours including some interesting metallics. This afternoon the sun came out long enough for me to grab the following pics.  As the weather was pretty variable I didn't know how long the sunlight would stick around I just popped a couple of coats over my existing manicure, a-England's Elaine.  As it turned out it was a pretty excellent base coat for FF.  I'd already seen swatches of the polish alone on BeneBelles blog and knew it was super sheer and that layering was the way to go

So first up a couple of bottle shots 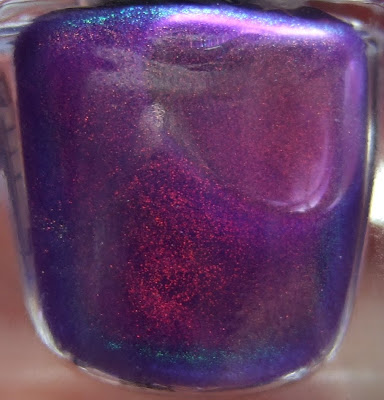 In the bottle it's predominantly a pinkish purple with lots of shimmer and a duochrome of blue and some green and maybe a hint of gold around the edges.

The bottle is tiny, just 5ml and they cost £3.99, pretty expensive for such a weeny amount of polish but in this case totally worth it!

All the following swatch shots are 2 coats of Fantasy Fire over my existing mani of a-England Elaine, a dusky purple.  Looking at the swatches now I wished I'd added a topcoat to really make the shimmer sing but never mind....

With all of these pics you can click for bigger versions. 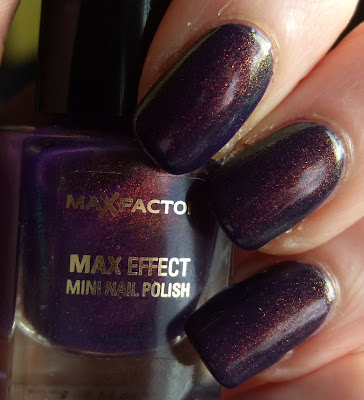 This was the only shot I got that just about showed all the different colours - I think 230 maybe more overtly duochrome. 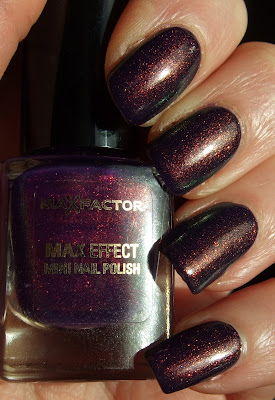 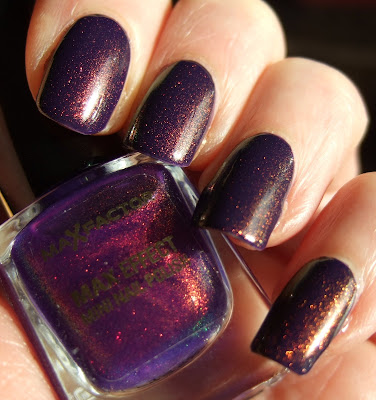 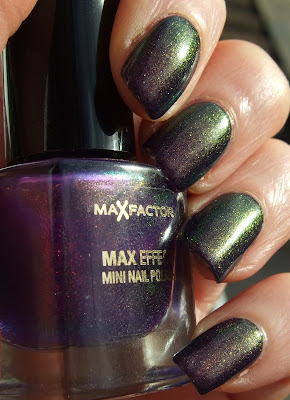 Love how it looks like a gradient in this shot, just wish my ring finger had been at the same angle! 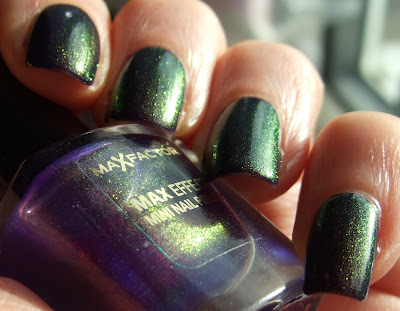 One of the few times you can see the green strongly in the bottle. 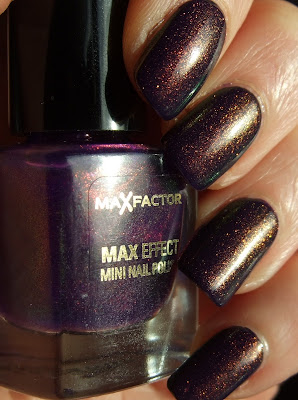 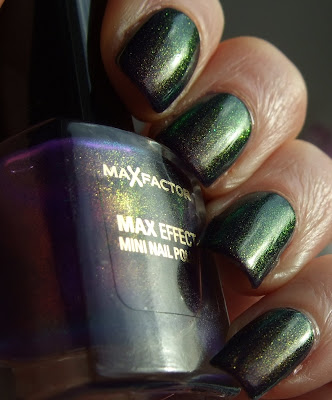 I hope you can see the range of the duochrome in these shots which starts as a sheer purple with a red shimmer and then switches between gold shimmer and a strong green with a green/gold shimmer.

Out of the sunlight the shimmer is much redder and there's no hint of the duochrome. 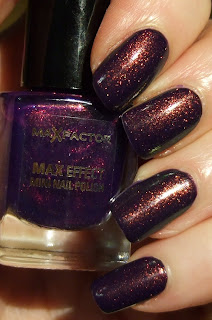 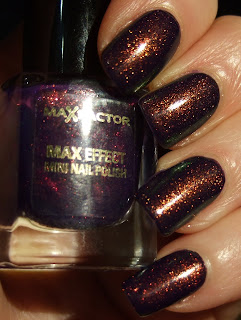 These are both under electric light and IRL the shimmer is redder still.

It is totally gorgeous and to be honest it's close enough to 230 for me!

There doesn't seem to be any information about the new colours on the Max Factor site, they still only have the old colours up so I can't tell you if this is part of a collection or just a new release of colours.

So, what do you think?  Totally stunning or what?!

A blast from the past this one, I've shown a fair few of my Ciaté Paint Pots collection before but this one got missed for some reason

So here is Sharp Tailoring 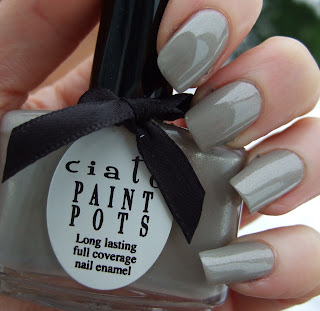 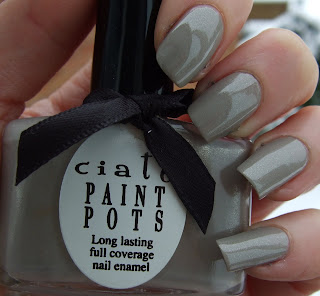 Sharp Tailoring is a warm grey with a white gold secret shimmer.


It's an unusual colour/shimmer combination,  at first I thought it might be similar to Zoya Harley but as you can see from the comparison... 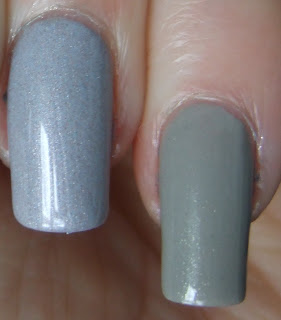 ...Sharp Tailoring is much warmer and the shimmer is less pronounced.

Swatch shown is 2 coats, with no topcoat.

Application, brush and formula were all good.

I'm a fan of grey polish anyhow but this is a clever twist on regular grey, being warmer, with perhaps even a nod to the 'greige' trend of old (that was probably current when this was released) and an unusual secret shimmer. 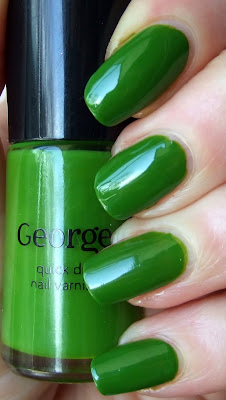 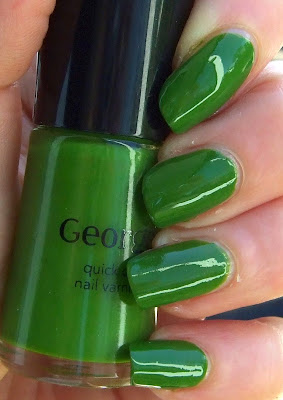 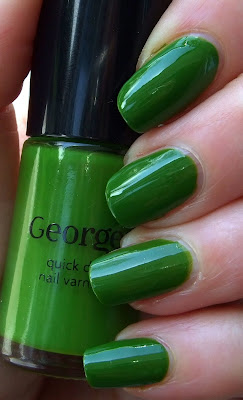 Prairie Green is a mid green creme, a classic grass green colour although I can't say I have a lot of grass green polishes in my collection!

Swatch shown is 2 coats, application and brush were fine, especially for such a cheap polish.  And it's very shiny.

As I mentioned before George is a supermarket brand and this polish was priced at a very affordable £1.50!

Anyone else tried any George polishes? 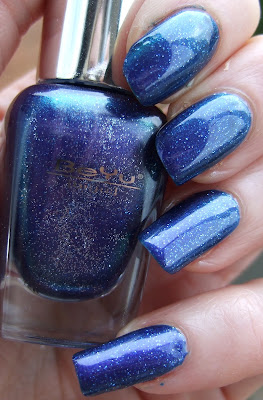 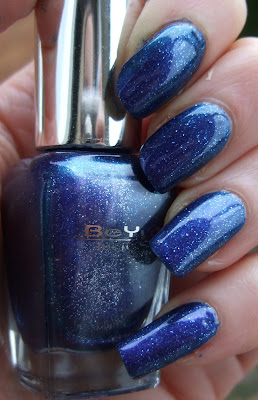 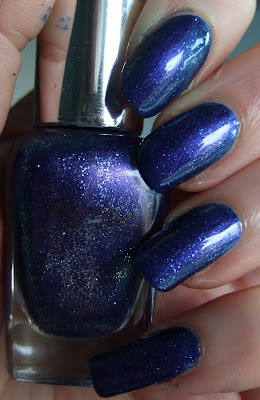 Beyu 381, despite it's rather dull name, is a gorgeous polish.

Beyu bottles are pretty tiny, only 8ml,  and have small brushes but I found application was fine with the small brush.  **disclaimer - I have pretty small hands/nails, although as you can see in the last pic I still managed to get polish on my thumb - d'oh!

I picked up my Beyu on one of my many trips to Germany, in a high end drugstore IIRC.  I just wish they were available in the UK.
at January 10, 2012 5 comments: 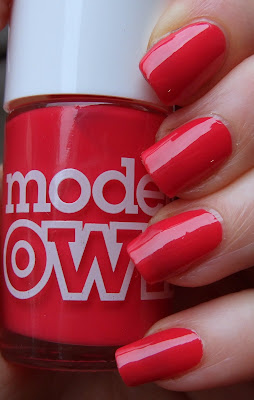 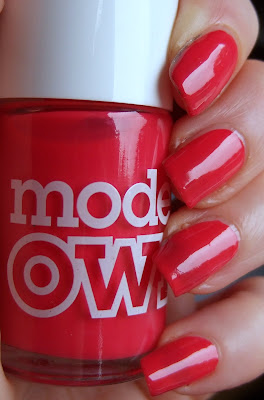 Something bright and cheery to belatedly kick of the New Year

Models Own Raspberry Crush is a bright jelly/creme.  It's super shiny but probably could've done with another coat. I find the jelly always looks more pronounced in photos than on your nails.

I'd say it was a little more pink toned IRL.

Gawd, what happened to the rest of December, huh?

Mostly Christmas shopping and planning happened, and a couple of gigs and my bff injuring her back and being laid up for 2 weeks.

In summary stuff happened and I lost all my blogging time.

But, New Year, new start.  My plan for this year is to be a slightly more frequent blogger, it's not like I don't have the polishes or photos, it's just the putting it out there that's missing! 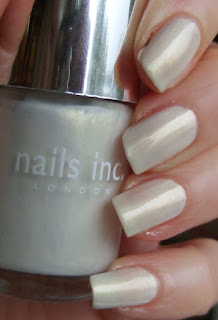